House Championships - Deal or No Deal 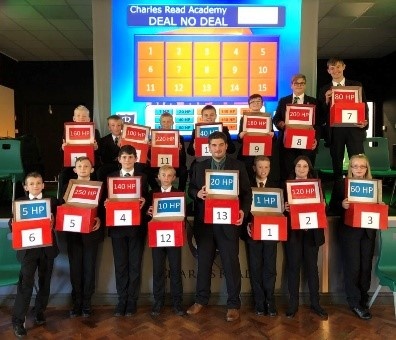 Over 40 students took to the stage this term, alongside their Head of House to take part in House Deal or No Deal. The competition saw Heads of House in the lime light, attempting to claim a massive 250 house points. Points prizes ranged from 1 house point to 250 house points.

First up was Mr Allen and Terra who were hoping for a large point haul to extend their lead at the top of the house championship leader board. Terra got off to a dream start, eliminating four low scoring boxes before receiving a first round offer of 90 house points from the banker. Mr Allen kindly declined the offer and choose to continue, searching for a larger haul. Following another three rounds of suspense and excitement, Terra found themselves in the final round, with only two boxes remaining, containing either 20 or 160 house points. The phone rang, and Terra received their final bankers offer - 95 points. The crowd were urging Mr Allen to take a deal and walk away with the points and after careful consideration it was a DEAL. It turned out to be the correct decision as box 13, originally selected at the beginning only contained 20 house points.

The following day, Miss Canny and Caeli entered the stage with the hope of at least matching Terras score. Caeli got off to the worst start possible, losing 3 of the highest scores in the first round. Despite the poor start, Caeli and Miss Canny kept the faith and the next 3 rounds were much better, reaching the final round with 2 boxes containing either 100 or 220 house points. Miss Canny was now feeling the pressure as the banker offered a very tempting 140 house points, creating suspense among the spectators. A mixture of shouts of "Deal" and "No Deal" were being screamed from the audience and after some consideration the crowed were shocked when Miss Canny decided to gamble and reject the bankers deal. Unfortunately for Caeli, their original box contained 100 house points, not the 220 house points they were hoping for. Excellent game.

The final round of Deal or No Deal saw Aqua house require only 45 points to reclaim top spot in the house championship. It was up to Miss King and Mr Thornton to try and claim the points in what turned out to be a thrilling and entertaining game. Continuously avoiding the higher scores in the early rounds, Miss King and Mr Thornton set Aqua up for an intense final round with just 1 house point and 220 house points remaining. Following careful deliberation, the bankers offer of 110 house points was too good to turn down and Aqua took the deal. To Aquas despair, if they decided to continue they would have won 220 house points as they discovered the original box contained the second highest points prize. 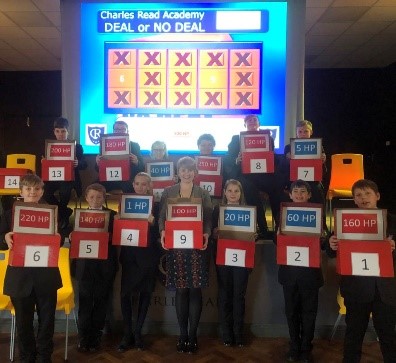 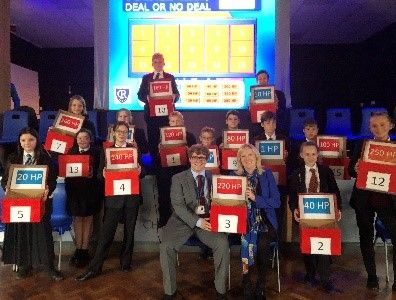