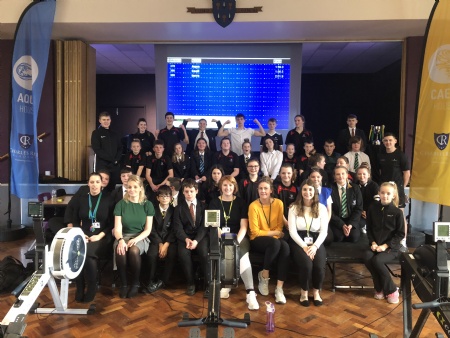 Term two’s sporting house competition saw students and staff of Aqua,Caeli and Terra go head to head in an indoor rowing competition. Terra and Caelii entered the competition with high hopes of closing the gap on Aqua in the overall leader board. Despite their best efforts it was Aqua who claimed another victory.

In conjunction with the ‘Rowvember’ initiative the house competition brought together over 40 students across all year groups to compete in a number of individual and team relay races. The atmosphere was electric with fellow students and staff cheering on their house teams as the interactive house rowing boats raced across the big screen in the main hall.

The competition was extremely close throughout with a number of tensematch ups, most notably the KS4 boys who sparked excitement in the hall due to their strength and power in what was an thoroughly entertaining race. Students of Terra and Caeli put in a valiant performance but fell short, by just 1 point, of prevent Aqua from further extending their lead at the top of the overall leader board. With the winning points going to Aqua it was Terra who finished in 2nd place, closely followed by Caeli in 3rd.

Both students and staff, competing or supporting, in the competition did themselves proud. They all demonstrated the CRA core values throughout. Well done to all.

The next competition will see students and staff return to the main hall to compete in the 'NOW This is What I Call Music Quiz'.